During the last two week I have managed to add two more ARM based Development boards to my Linux OS development Project , the first being the Banana Pi M2, Quad core A31s-Cortex-A7 1Ghz processor system and the second the Radxa Rock, ARM Cortex-A9 quad core @ 1.6Ghz.

The Specifications for both the boards is as follows : 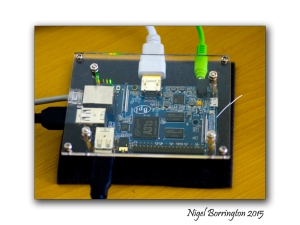 The Main advantages of this Board over the new Raspberry Pi board the Raspberry Pi 2 ( A board I respect very highly! ) are the addition of a much more advanced CPU and GPU, The SGX544MP2 is one of the fastest graphics cores on the market for both Arm based Linux and it co- operating system of Android. The system Ram is a full speed DDR3 and the Ethernet port a full speed 1000Mbps.

The board also comes with much more advanced ports for a ( LVDS/RGB ) – LCD touch screen along with high res camera connectivity.

I have processed some benchmark tests on the Bpi M2 and on average this board runs at some 25% faster than the Raspberry Pi 2 which in itself is no slouch for this category of computer system.

Overall I am very impressed with this board as it is fast and very stable in operation, Its very fresh on the market so as yet will only run Raspbian Linux , I say only but Raspbian is a very stable and fully featured Linux implementation ! , It is fully expected that both Android and Ubuntu Linux along with Fedora Linux v21 will soon be available.

I will post a full review of this board when I have had some more time to work but as I final note here, The Allwinner A31s along with all the Allwinner Arm core CPU’s are among the fastest and best documented CPU’s around with full programming documentation being available as inline with the Open Systems methods and ethics.

I am very excited about receiving this Rockchip RK3188 based system and a big thank you to the American based distributes involved, who passed on a post IT show example 🙂

The specifications of this development board are as high as it gets for an ARM based computer system, it has taken many years ( Almost 30 years! ) for Arm based computers to advance to this level and future developments continue.

The areas of this board that excite me the most are , the 1.6ghz Quad core CPU that along with the 800 Mhz DDR3 RAM and L1 and L2 High spec Cache, place this system up near the 2Ghz + Intel Celeron processor specs. When you take into account that Both the Android and Linux Operating systems are vastly less demanding than MS-Windows with its Security issues – that require vast amounts of resources from a CPU and system memory along with constant disk thrashing needs, this makes the Radxa with its Quad core Cpu a very impressive computer indeed.

The areas of this board that both impress and excite me the most are the (CPU , Fast network connectivity and 80pin GPIO output) .

The fact that this system has twice as many GPIO output and input pins and the Raspberry Pi 2 and the Bannana Pi m2 is of great interest as it will be interesting to see just how these extra pins can be used during some Assembly language and Python coding projects.