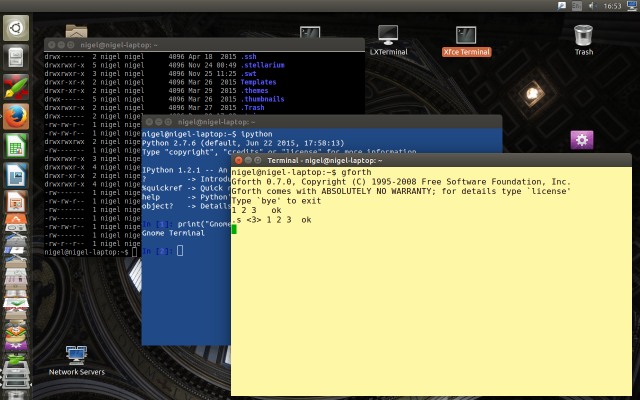 Please note that this post follows on from : The Linux Shell

Operating systems such as Linux and Microsoft windows owe their current existence to much earlier versions of themselves with ASCII-code Text based command lines as their only interface with their users.

Linux as an operating system, owes a great deal to Unix, with its user interface operating from physical ASCII code serial-connection terminals. The then following X-windows originated at the Massachusetts Institute of Technology (MIT) in 1984, it provided a basic framework for a GUI environment: drawing and moving windows on the display device and interacting with a mouse and keyboard. At its start X-windows was not seen as vital in order to operate a Unix based system, as such X was viewed as a Utility application and X applications as alternatives only, to text based programs.

In the same fashion but a little later, Microsoft Windows history began with MS-DOS followed by Windows 1, on November 20, 1985. This version of Windows like X-Windows was viewed by most as a utility application only and distributed by Microsoft as such, most users stayed with MS-DOS for a considerable time.

You can see from the two images here, just how close the early versions of both operating systems GUI’s are.

Over the Years Microsoft has done its best to offer users a Windows GUI interface only, trying to move people away from any text based commands. This however has not always gone down well, take windows 8 for example!, many felt it a step to far and Windows 10 has now move back towards at least giving the user a little more control.

For a desktop application user, having a Windows GUI environment only is ok, however for more advanced users of MS-Windows who deal with many thousands of files and vast amounts of data, it is almost impossible to control their systems.

In order to help these power users, Microsoft offers their Power-shell application, which in effect offers its user a more advanced MS-DOS command like experience and allows systems administrators to construct scripts, used to control system settings and file manipulation in an advanced and time saving way.

Back In the world of Linux and to some extent MAC-OS and Android, the command shell has very much stayed at the front of these operating systems. As covered in my posts on “Linux and Unix commands shells” you can see that shells such as KSH and BASH have been around for a long time and are still both actively updated and supported.

Linux shells are ingrained into every area of a Linux installation, they sit at two levels (Systems shells and user shells), operating from file management to user management, file and system security. There is little dispute that this fact alone keeps a Linux based system free of Viruses, unlike MS-Windows.

MS-Windows needs expensive and resource hungry applications as additional products, in order to achieve the same level of security based operations that Linux is doing natively with every single task.

There are three fundamental ways that a user can make use of any one of the many available Linux command shells :

1.. By logging into a system that is configured to offer the user a text based terminal at first point of contact, with or without the ability to then open a Graphical X-Windows based environment. Some distributions of Linux such as Arch-Linux are configured in such away when first installed, it is up to the users to add a GUI environment post installation.

2.. By login into a Linux machine remotely with basic TCP/IP network services such as SSH or FTP you will be presented with a command shell terminal environment.

3.. By executing what is referred to as a Terminal emulator application, “Emulator” because this type of application acts in nature as a pipe between the lower level shell and a graphical user environment and thus emulates a more native command line ASCII terminal interface.

It should be noted that with both of the above methods of interacting with a Linux shell, the shell that you will be presented with as default, is the one defined by the settings that are held within your user account details.

With the first method ( ASCII text based ) of shell interaction you have few choice’s when it comes to how your interface is configured. For command entry, you can configure such things as the type of text editor that you are working with (i.e. VIM or Emacs). Choosing one over the other effects such things as the methods used to recall previous commands and the movement of the cursor with control codes. Digging deep when it comes to this subject is well worth the effort as a full understanding of command entry, such as command completion will help you fly through tasks that otherwise could take a considerable duration.

The terminal emulator form of contact with your chosen Linux shell is a lot more exciting and fulfilling.

Most Linux Distributions come pre-installed with a terminal emulator, these are usually related to the type of Graphical desktop environment, that your user account has defined as a default, (i.e. GNOME or LXDE).

You can also install a different Terminal emulator from a Linux repository, finding these applications is also possible by using a package manager such as Synaptic or Yum or even the Ubuntu Linux software centre. 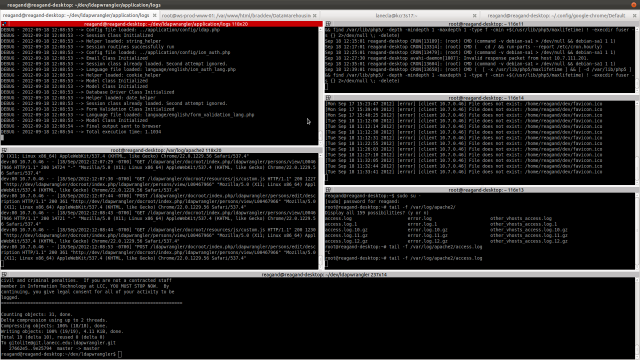 More examples to look up and review for yourself before installing are( rxvt-unicode, Guake, Gnome Terminal, konsole, Pantheon Terminal, Terminology and Terminix).

My personal favourite Terminal emulator is, Terminator – as it Supports multiple terminal windows and is very user friendly and Highly customizable.