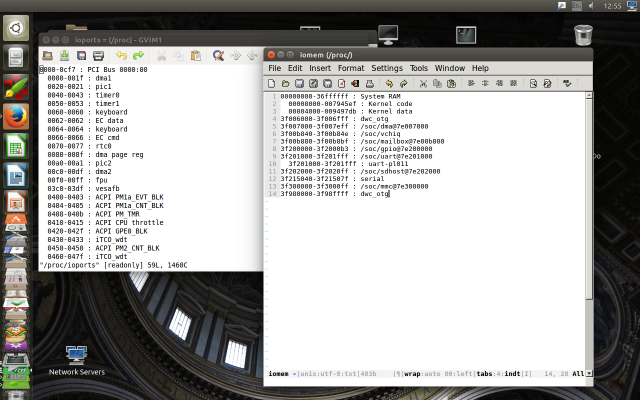 Please note that this post follows on from : IRQ’s and Interrupts

I/O Addresses and I/O memory relate to bi-directional Communications between (CPU/Computer to devices ) as opposed to IRQ’s/Interrupt’s which are one way (device to CPU/Computer) communications.

Communication via I/O Addresses and I/O memory also relates to more general data transfers as opposed to Interrupts using IRQ’s which tend to relate to operational signals such as “I have finished Printing your document”.

Note that unlike Interrupts, this is not a one way communication process, the CPU can also use a device’s IO port to read status information about the device.

Like interrupts, ports and addresses should not be shared!

The first column gives the I/O port address range reserved for the device listed in the second column.

System devices also need to have system memory allocated to them, devices such as the system RAM and GPIO ports .

The following is an example of the file /proc/iomem, taken from a Raspberry PI model 3

The first column displays the memory used by each of the different types of registered device. The second column lists the details for the allocated memory.

This file tells the Linux Kernel system, where to find and store data that relates to the devices listed with in it.

Note : As with all Linux study, this information relates to a general perspective. You should take into account that Different versions of Linux May or May not do things in the orthodox fashion.

The Raspberry Pi using Rasbian Linux for example, does not have a /proc/ioports file available but does have the file /proc/iomem. Ubuntu Linux on a standard Intel PC has both /proc/ioports and /proc/iomem available to the system services.

You always have to dig deep when it comes to your own installation of Linux!